Royal Office / About us / Bureau of the Royal Household

History of the Bureau of the Royal Household

The Bureau of the Royal Household is a government agency that was established in 1350 when King Ramathibodi I (King U-Thong) founded Ayutthaya as the capital, and set up a system of government divided into four departments called “chatusadom” [four pillars], namely city, palace, treasury, farm. Each department was headed by the titular position of ‘Kuhn”.

The “palace” department was the origin of the Bureau of the Royal Household, responsible for the court, and handling justice duties on behalf of the king. In charge was the “Kuhn Wang”.

King Borommatrailokkanat (1448-1488) then revised the system, separating the military from civilians, with “Samuha Phra Kalahom” in charge of the military, and “Samuha Nayok” in charge of civilians. Both were equal chancellor positions.

The four “Chatusadom” were under the supervision of “Senabodi” of ministerial level.Since the reign of King Borommatrailokkanat, the “Palace Department” was responsible for everything related to the court, including the restoration of the royal palace, royal ceremonies, administration of courtiers except for Royal Pages, control the royal treasury related to the royal palace, and assigning slaves and peasants to work in royal temples. It also handled the judiciary on behalf of the king, and was also responsible for appointing a governor to be based at different towns as head of the judiciary and to inspect officials. It also appointed the Master of the Governor’s Residence responsible for all activities within the official residence of the Governor. The Palace Department was divided into several divisions such as the court police division (responsible for the protection of the king), the royal vehicle division, the royal ordnance, the royal rice barn and the royal garden division.

During the Ayutthaya period, the Palace Minister was titled “Phya Thammathibodi”, which was changed to “Chao Phraya Thammathikon” during the Rattanakosin period. His official emblem featured an angel astride a white ox.

The system as designed by King Borommatrailokkanat was retained for over 400 years throughout the Ayutthaya and Rattanakosin periods. When King Chulalongkorn, Rama V, came to the throne, he restructured the government system. The new central government, announced on 1 April 1892, was divided into 12 ministries, while the old system of “Chatu Sadom” and the positions of Chancellors and Ministers were abolished. Each new minister in charge of the 12 ministries had equal status. The Palace Department became the Palace Ministry, with responsibilities for the royal court as before. However, responsibilities for the judiciary were transferred to the Justice Ministry which was newly established. The first Palace Minister was the king’s younger brother, Prince Prachak Silpakhom, who had formerly held the same position in the Palace Department. 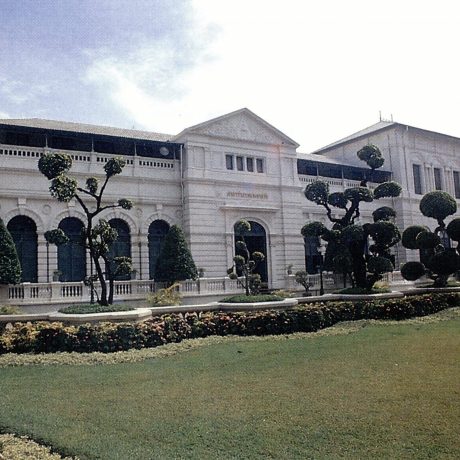 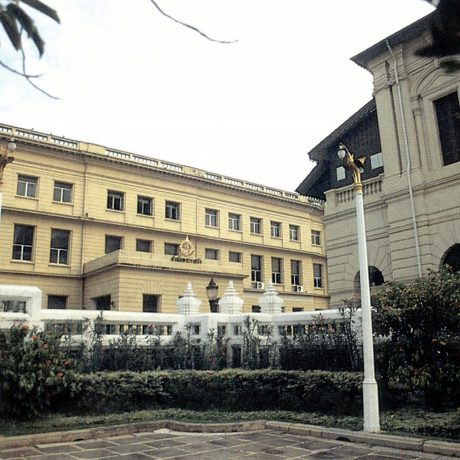 In 1913. King Rama VI abolished the image of the angel astride the white oxen as the official emblem for the Palace Minister, using it for official documents instead, and replaced it with an emblem with an oxen on a pedestal. Then, during the reign of King Prajadhipok, Rama VII, the education division, the religious ceremonies division, the royal institute division, religious property division, and the fine arts division were transferred to the Education Ministry. The status of the royal page division was reduced, but it still remained under the Palace Ministry.

During the reign of King Bhumibol Adulyadej, Rama IX, after the King returned permanently to Thailand upon the completion of his studies in Switzerland in 1951,  more divisions were set up in the Bureau of the Royal Household to coordinate the increasing number of royal activities.

The year 2016 was the first year of the present reign, ushering in a new structure of the palace offices under the custody of King and no longer answering to the central government unless otherwise dictated by the relevant acts of 2017. The organisation chart is currently under review.

(Reference: Kanchanaphisek Thai Encyclopaedia on “History of the Bureau of the Royal Household” by Mom Rajawongse Sangsoon Ladawan, 1992)